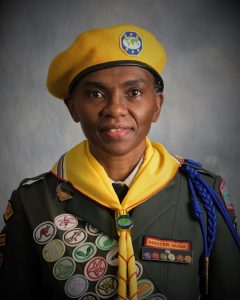 Born in the beautiful island of Jamaica, Juanita spent most of her early years with her grandmother. Through her grandmother’s influence she developed a love for nature and the Bible. She was always very active in church.
Juanita was introduced to pathfindering shortly after becoming a member of the SDA Church. She was thrilled to discover that pathfinders did many of the things that she enjoyed and has not looked back. While juggling several offices in church she served as a counselor and secretary in Jamaica. After migrating to the USA and becoming a part of the Southwest Philadelphia family she was eager to pick up where she had left off in Jamaica (Once a Pathfinder, Always a Pathfinder).
She got involved with SWP Lightbearers serving as an instructor and later picking up the role of secretary both of which she held for many years. Desiring to better equip herself for service she continued studying and completed the PLA and PIA courses as well as Children’s Ministries Certification. She also served as Director for the club.
Juanita has served in several ministries in the church as Sabbath School Teacher, Personal Ministries Secretary, Church Clerk, Head Deaconess and Children’s Ministries Leader. She is married to Ewan and is blessed to have Evelia and Jawan as her children. She is passionate about helping children to maximize their God-given potential and leading them into discipleship.