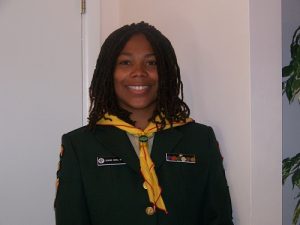 Genome (Genny) Small Moore, started as a Pathfinder in 1984 with the Germantown Lenapes in Philadelphia, PA under the Leadership of Bro. John Hall and Mentor, Joan Weeks-Moore. She continued working with the club as a Junior Counselor until she left in 1991 for college.

In 2001, she returned to Pathfinders as a Voyager with the Capitol Hill Blazers in Washington, DC. She worked with this club as a Counselor, Deputy Director and as the Director. During her 5 year term with the Blazers she completed both the Guide and her Master Guide in 2004. Later she completed her PLA in 2012 and PIA in 2014.

She started working with the Allegheny East Pathfinder Executive Committee as the AEPCA Secretary in 2003 which she held proudly until 2008. In 2008 she started her new role as one of the Associate Executive Coordinators. She was excited and nervous since she was replacing the legendary Bro. Merwyn Arms, but with his encouragement as well as Pastor Claude Harris, Fred Craig and Dennis Moore, she was honored to continue God’s work in the leadership position. Starting in 2014, she was promoted to Executive Coordinator. Being the first female to hold this position, she prays daily that she is able to fulfill this tremendous opportunity God has entrusted with her. She has so many hopes and dreams to make Pathfinders bigger than we can imagine. Fortunately, she has a great team! She strongly believes in Teamwork and Commitment. As she strives to Increase her Faith daily she hopes to empower all leaders to stay positive at all times. Too much negativity is already in the world. Let us share the love that God wants us to infuse to everyone we come in contact with. Let’s build our character so we can be CHOSEN! May we strive to be like Jesus for “Jesus grew in wisdom and stature, and in favor with God and man.” Luke 2:52